The Emergence of the Bak Kut Teh 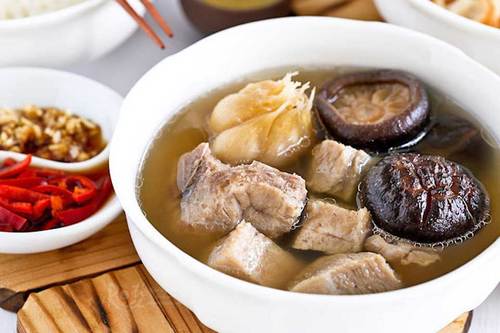 Bak Kut Teh is a popular staple amongst the locals in certain parts of both Malaysia, Singapore and even in parts of Thailand that are predominantly dense with ancient Chinese communities widely known for its extravagant flavor. The dish itself translates to “meat bone tea” as it would contain just pork ribs simmered and served up in a broth with an assortment of vegetables and spices (great for a cold day huh). Bak Kut Teh is commonly eaten as a filling morning breakfast, however in recent times, it has also been consumed for lunch and dinner(or even brunch) by several people in the South East Asian region.

The origins of the dish have been heavily debated, therefore there is no accurate or proven detail of origin for Bak Kut Teh, however, there have been multiple theories about how it came to be. One such theory is that dish first made an appearance in Klang, Malaysia which the local people believe that it is the official birthplace for the dish while others seem to believe that the dish was created by a Chinese physician during the 1930’s and there are those who speculate that the dish was brought over by an individual from Fujian, China to Klang in the 1940’s, another common claim is that the dish was created in Port Klang itself for the sole purpose of providing more nutrition to the workers in the area. By the end of the 1960’s a variant of the dish had made its way to Singapore, said to have been founded in the hugely diverse River Valley and Clarke Quay areas, and found massive success that allowed some restaurants to focus solely on serving up the dish while others aimed to distinguish themselves further by transforming into massive restaurant chains.

The general consensus is that the dish simply contains pork ribs, broth and vegetables in addition to some spice such as garlic, cinnamon and star anise, but there have been instances when other ingredients such as offal, Chinese cabbage or even tofu have been included to make it distinct from the supposed original in addition to giving it more flavor. Bak Kut Teh is said to have 3 primary variations labeled as Hokkien, Teochew and Cantonese. Each variant has its own distinct flavor that appeals to the various communities in Malaysia and Singapore. The Hokkien style is said to have a much darker broth due to the combination of multiple herbs, spices and the use of both dark and light soy sauces during the cooking process. The Teochew is supposed to have a lighter colored broth as it does not include the use of various spices and sauces like the Hokkien version, instead the pork ribs and bones are simply boiled with a heavy seasoning of salt and pepper, hence being described as “more peppery” than the rest, it is also the most commonly seen variant in Singapore. The Cantonese version emphasizes on the flavor of the broth, similar to the Hokkien, however it is said that more medicinal herbs are used than in the Hokkien and slightly less spice in order to make way for the earthiness of the herbs to dominate the flavor of the soup. There are a few other variations that differ significantly from the rest like the dry Bak Kut Teh, mainly seen in Malaysia where instead of having a soupy broth the dish is surrounded by a thicker gravy which would include an assortment of dried ingredients like dried squid, dates and chilies as this version of the dish is supposed to bring about the sharp flavors and textures of its ingredients. Additionally, Bak Kut Teh is also traditionally accompanied by an Oolong Chinese Tea, which is supposed to act as a palette cleanser to the strong flavors present in the dish.

While being one of the countries' staples and a highly sought out dish by both tourists and locals in Malaysia and Singapore, it's not hard to see why the dish is so immensely popular even if it is very high in calories. Healthier options for Bak Kut Teh have also risen in more modern times to combat its extremely high caloric intake. One such place would be Ming Ren Bak Kut Teh, a restaurant in Singapore that has found a way to mitigate the fat found in the pork (or beef) and is served with fresh coriander and dry bean curd. However, despite its healthier counterparts, the dish is best served and eaten the way history dictates it to be, just be sure to eat it with a few friends if you want to get that summer bod in time, remember Bak Kut Teh was meant to re-energize laborers during the early-mid 1900’s.