The story of Harpo Gooneratne 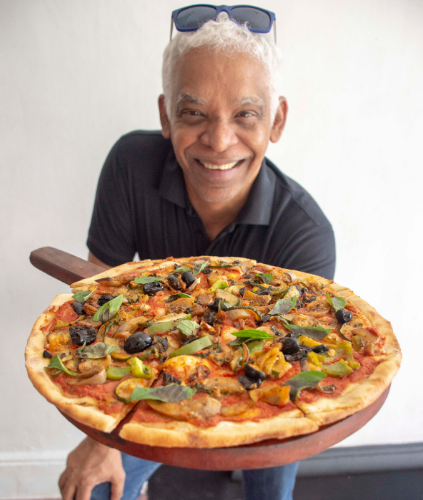 “People, Food and Music”, this aptly describes the passions of Lalith Gooneratne known and adored by many as Harpo. He owns a multitude of popular restaurants in Sri Lanka such as The Bayleaf, The Commons Coffee House, and of course, Harpo’s Pizza. We recently had the pleasure of interviewing this exceptional individual.

Harpo attended St. Thomas’ College in Mount Lavinia for his primary and secondary education, and he also earned a Diploma from a local Hotel School. He was passionate about sports and played Cricket and Rugby. He also stated that his sole regret in life was not playing in the 100th Battle of the Blues, the annual cricket encounter between St. Thomas’ College and Royal College, Colombo.

Harpo always had a deep passion for music and as a result, he started off as a DJ in the early 90s, performing in hotels such as the Bentota Beach Hotel. He also describes himself as the 1st ‘mobile’ DJ in the country as he performed in multiple locations. His passion for music still burns strong as he still performs in a variety of occasions. He even performed in a millennium new year’s party in the Maldives which he also described as a moment he wouldn’t forget as there were no over-the-top celebrations and it was a very different experience.

The first restaurant in the long chain of Harpo’s Cafes and Restaurants is the Commons Coffee House, a great place for a lovely meal and coffee, followed by the Bayleaf, an italian restaurant located in the heart of Colombo. It is undoubtedly one of the best restaurants to enjoy Italian cuisine with quite an extensive menu. Furthermore, Park Street Mews Restaurant and the Curve Tapas Bar at the Park Street Mews Complex, and Colombo Fort Cafe at the Dutch Hospital Complex are also part of the substantial chain of Harpo’s Cafes and Restaurants.

Harpo’s Pizza has been around for more than 12 years and is a leading pizza brand in Sri Lanka. During our interview, Harpo described it as a “Pizza and Pasta brand”, as the restaurants also serve luscious pasta along with their famous pizzas. He also stated that an advantage they had when starting out was that they focused on serving wood-fired, fresh traditional pizzas as they weren’t very popular back in the day. Harpo’s pizza was Sri Lanka’s 1st wood-fired homegrown pizza brand.

In addition to the 9 and 12-inch pizzas that are usually offered, they also feature a “gigantic” 19-inch pizza and the “square” 22-inch pizza, which is also the 1st square-shaped pizza served by a restaurant in Sri Lanka. Fun fact about the Harpo’s Pizza logo, the “O” actually has a pair of sunglasses on top of it which indicates Harpo’s tendency to wear the sunglasses on his head. 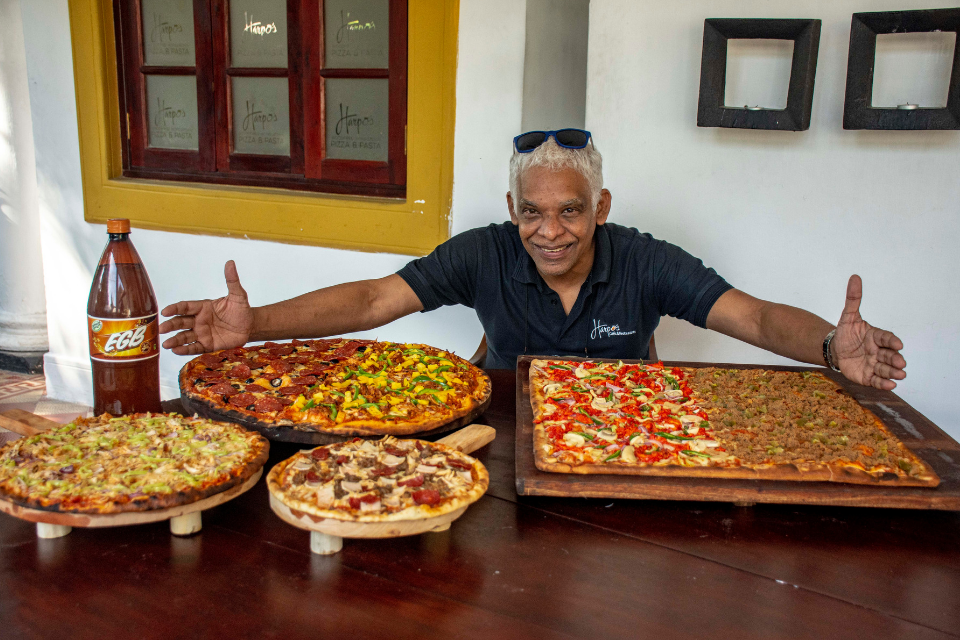 Harpo’s Pizza also introduced Sri Lanka’s first wood-fired pizza roaming truck, dubbed the ‘Pizza Truck’, along with a Pasta Cart. This is an ideal match if you’re looking for a fun, one-of-a-kind catering option. Harpo’s Pizza is also making their way to the retail industry with their newest products, pasta packs and home-made sauces.

The restaurant industry is consistently and exponentially growing, and Harpo always makes it a point to try out some of these new arrivals. Despite trying out most of the pizza outlets, he still believes that Harpo’s Pizza is the best one out there. However, he did state that he is very happy to see new things coming up in the industry.

Furthermore, he also stated that as the “digital age has come about”, it is very important for the restaurant industry to embrace these changes as it has the potential to be a huge advantage. As a person who depended on printed media and radio to publicize his restaurants, he was very keen on utilizing the various digital medium to achieve this task on a much larger and better scale.

Harpo is a resolute believer of ‘doing what you enjoy’. He went as far as to say that the best advice he ever received in his life was to “Do what you like”. This unquestionable spice of boundless passion is evident in all the work he has done, whether it be DJ-ing or his work in the restaurant industry. He’s also a big fan of Richard Branson and he stated that Branson’s story was an inspiration to him.

Talking about his passions, Harpo has done a lot with regards to charity. He said that “it’s important to give back to the community” and his passion for charity work is so substantial that his friends and colleagues call him ‘Mr. Goodwill Santa’. One of his most significant projects in this regard is the Harpo’s Hotel School in Galle which primarily takes on children in the locale. The school has produced about 400 individuals skilled in the restaurant sector since its inception in 2012.

Finally, we asked Harpo what advice he would give to someone planning to get into the restaurant industry. His first words were that “the success of anything depends on consistency”. After emphasizing on the toughness of the restaurant business, he went onto say that you need to be genuinely passionate about what you’re doing, you have to be a ‘people person’ as the restaurant industry has a personalized nature to it, and that you have to be able to take criticism as it is inevitable. According to Harpo, there are 4 key features that a restaurant needs in order to be successful. Charming ambience, great service, delicious food, and clean washrooms. So if you’re thinking about getting into the restaurant industry, these are some valuable guidelines from someone who is not just extremely experienced but also very passionate about the industry.

The story of Lalith ‘Harpo’ Gooneratne is a highlight in Sri Lanka’s success stories. From the origins of ‘Harpo Productions’ (now Harpo’s Cafes and Restaurants) in 2004, he and his brand has been consistently growing in popularity and in quality. This is indeed an inspiring story to any entrepreneur let alone a Sri Lankan.